The state of Manitoba’s post-secondary system, two years after the pandemic 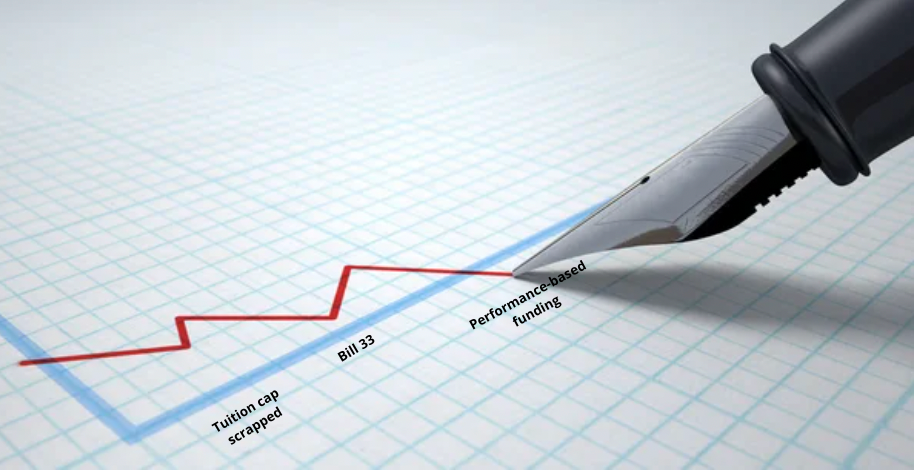 The state of Manitoba’s post-secondary system, two years after the pandemic

As students prepare to return to campus this fall, what awaits them? According to the Manitoba government, it’s higher tuition rates and a push towards performance-based funding (PBF) once more.

PBF is a funding model in which governments disperse operating grants for public post-secondary education institutions on the basis of various metrics; such as “on-time” graduation rates, student employment after graduation and, in Manitoba’s particular case, “labour market demands”. Primary concerns with PBF as it has been implemented in other jurisdictions includes the further loss of funding for the arts and humanities, stricter admission requirements for prospective students, and restricting the autonomy of universities. Since the introduction of Bill 33, which gave the Minister of Education the power to set differential tuition rates (a common strategy used by other PC provincial governments in Canada to implement performance-based funding), there has been resounding opposition by post-secondary stakeholders.

On June 14, 2022, the Manitoba government held a public consultation with student associations and faculty about the implementation of a PBF model.  However, what was quickly apparent to the University of Winnipeg Faculty Association (UWFA) was that the consultation was more of an assumed agreement by the government. According to UWFA president Peter Miller, “We decided this was not really a consultation as far as we understood it, because it was starting from the assumption that we agreed with this process.” He added, “The three of us [with UWFA] fundamentally disagreed with it, and we wanted to come there and say that and tell them why, from our expert opinion as faculty, this was a bad idea for universities, and we weren't given that chance." Other key participants were left out of the discussion, as the University of Manitoba Faculty Association’s invitation went to spam, and Brandon University’s faculty were unable to attend. The Manitoba Organization of Faculty Associations (MOFA), which represents faculty at four universities, were originally never invited - when a meeting invitation was sent, MOFA was booted from the meeting without explanation. Clearly, the efforts of Stefanson’s government to include a diverse representation of faculty of Manitoba’s universities are performative.

The face of Manitoba’s postsecondary education system is changing, but those leading the policy discussion are disproportionately only those in government. CFS-MB stands with the faculty associations of Manitoba and their right to be heard equally and fairly from the PC government. CFS-MB will continue to monitor the actions of the PC government and bring students voices’ to the legislature. We will continue to advocate for our vision of a Manitoba where education is accessible, affordable, and not dictated by profit.